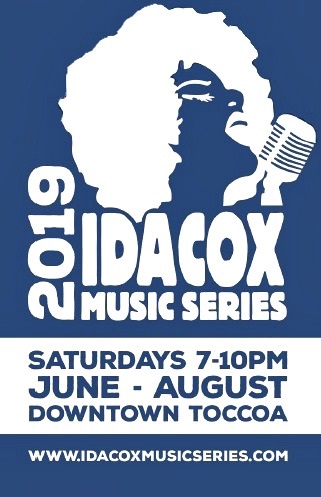 Event Description:
Named after the legendary "Uncrowned Queen of Blues" and Toccoan native, the Ida Cox Music Series celebrates the best that Toccoa has to offer: A love of music, a celebration of diversity, and a whole lot of talent.

The 2019 Ida Cox Music Series takes place every Saturday in June, July, and August, beginning at 7pm. Each Saturday features a different artist, beer, wine, and food served on the street, and much more.

Already an accomplished blues guitarist by the age of 17, Hunter Callahan began writing his own music and developing his voice as a singer. After a few years of cutting his teeth in the Atlanta indie music scene, Hunter was selling out the more popular rooms like Smith?s Olde Bar, and becoming an SRO headliner at famed venues such as Eddie?s Attic in Decatur.
Event Media: